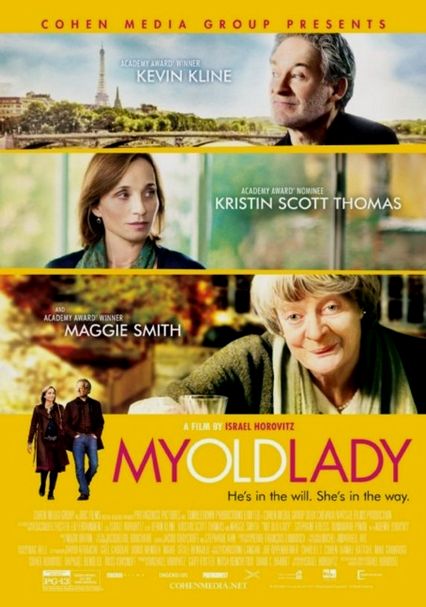 2014 PG-13 1h 48m Blu-ray / DVD
New Yorker Mathias Gold is delighted to learn that he's inherited a Paris apartment from his deceased father. But delight turns to dismay when Mathias travels to France to sell the property and finds his dad's former lover occupying the place.

Parents need to know that My Old Lady revolves around very messy, long-hidden family secrets that finally are revealed, disrupting the lives of three people (none of whom is particularly admirable) who are all nursing old wounds. There are some intense arguments, and orecovering alcoholic falls off the wagon in a spectacularly unpleasant relapse. Profanity is very sparing, which makes the words ("d--k," "s--t") have an even stronger impact when they're heard. There's also some kissing, off-screen sex, and casual/social drinking.

Two characters kiss. They end up sleeping together, off screen, and briefly discuss the ramifications of becoming involved. One scene features a comical description of sex, read aloud in a language class by people who don't understand the terminology.

Long-buried family secrets have a way of eventually finding their way into the open. When they do, the results can be explosive but also positive.

An elderly woman enjoys wine with her dinner every night. A recovering alcoholic falls off the wagon and ends up completely drunk and passed out on the banks of a river. He spends the next few days drinking heavily, becoming increasingly belligerent.