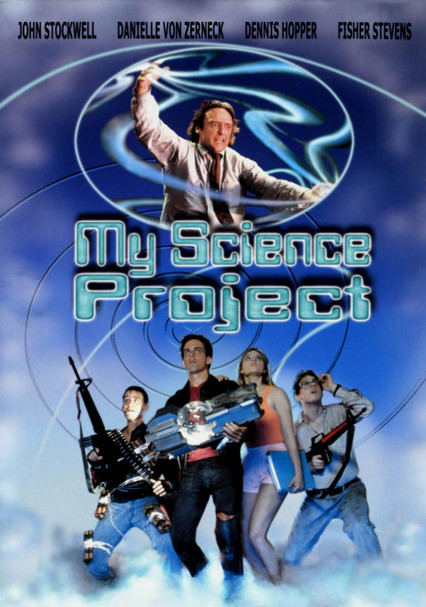 1985 PG 1h 35m DVD
Students Michael (John Stockwell) and Ellie (Danielle Von Zerneck) are looking for spare parts to build Michael's science project when they chance upon a strange object at a military junkyard. When they use the device, it sends their entire class into a strange and otherworldly realm. It's up to Michael and Ellie to undo the colossal damage and find a way back home. John Stockwell and Dennis Hopper co-star.

Parents need to know that My Science Project is a 1985 fantasy that invokes the spirit of the 1984 hit Ghostbusters, this time focusing on the release of uncontrollable alien energies rather than evil paranormal ones. There are plenty of scary effects and violence; younger kids may find it too intense. Though it's a comedy, you can expect to see shootings, a stabbing, a vicious dinosaur, breaking and entering, vandalism, cigar smoking, and beer drinking. There are a few sexual references. Expect to hear such words as "s--t," "ass," and "faggot." The heart of the movie is about learning through surviving disaster that friendship is important.

Someone mentions "free love." A guy and a girl make out in his car; both are clothed. A guy tells his girlfriend, "I'm not in the mood no more." A teenage boy and girl kiss. A teen says, "Danger makes great sex."

Teenagers blow up a town's power station to prevent alien powers from taking over. Teens fight a Neanderthal man, a dinosaur, Roman warriors, Vietcong with machine guns, and aliens with guns from the future.

Stay away from alien power sources. Bringing the past into the future can be dangerous. Don't leave important assignments to the last minute.

Cigar smoking. Teenagers drink beer. Adults drink wine. A teacher who pines for his heyday in the 1960s inhales some gas. Someone mentions smoking banana peels.