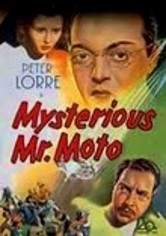 1938 NR 1h 2m DVD
Japanese detective Mr. Moto (Peter Lorre) dons an inmate's disguise to help Scotland Yard hunt down a gang of dangerous assassins in the fifth installment of this mystery series centering on the character created by Pulitzer Prize-winning novelist J.P. Marquand. The plot finds the well-mannered Mr. Moto trying to help his cellmate (Leon Ames) break out of jail, all so that the sleuth can get the dirt on his unlawful friends.