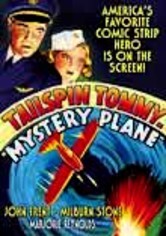 1939 NR 1h 0m DVD
When young pilot Tailspin Tommy Tompkins (John Trent) and his pal Skeeter (Milburn Stone) develop a revolutionary bomb-targeting system, they rush to hand over the invention to the military before foreign spies can steal it. But the cunning enemy agents seize the kid wonder and threaten to harm his girlfriend (Marjorie Reynolds) if he doesn't surrender the device to them first. George Waggner directs this adventure caper based on a comic strip.