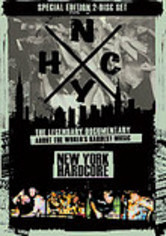 1999 NR 1h 26m DVD
New York City's hard-core music scene during the summer of 1995 is the focus of this groundbreaking documentary that features live performances and interviews from seven groups that defined the movement. The bands include Madball, 25 ta Life, Vision of Disorder, Crown of Thornz, 108, No Redeeming Social Value and District 9. Extras include never-before-seen footage and new interviews with Sick of It All's Lou Koller and H20's Toby Morse.