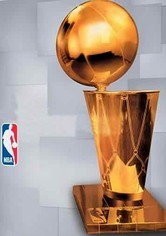 2007 NR 1h 17m DVD
Go courtside as the favored Boston Celtics take on the scrappy Los Angeles Lakers for the 2008 National Basketball Association championship in this special souvenir video. Features include coverage of the winner's season, the playoffs and the final series -- including the Celtics overcoming a 24-point game four deficit -- plus a highlights reel, exclusive interviews with the players and coaches, and behind-the-scenes footage.