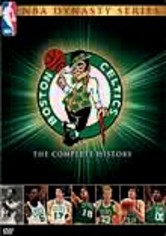 2004 NR 10 discs
Over the past 50 years, the Boston Celtics have won an unprecedented 16 world championships, from 1959 to 1966, making them the most storied franchise in NBA history. Included here is the complete history of the Celtics, along with a year-end compilation highlighting the championship seasons. Also included, for the first time ever on DVD, are the most memorable games in the franchise's history.