NBA Dynasty Series: The Complete History of the Lakers 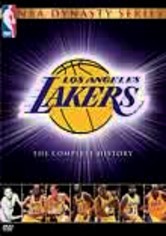 NBA Dynasty Series: The Complete History of the Lakers

2004 NR 5 discs
The Los Angeles Lakers have always had a fabled glow about them, and not just because they're based in a city that basks in the limelight of Hollywood. It's also because for decades, they've proven that they're a franchise to be reckoned with, featuring an unforgettable roster of talent including Magic Johnson, Kareem Abdul Jabbar, Shaquille O'Neal and Kobe Bryant. Catch the Lakers as they face off against their biggest on-court foes.