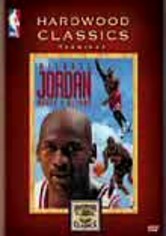 2006 NR 0h 57m DVD
Long lauded as one of the greatest players to ever hit the hardwoods, Michael Jordan retired in 1993 at the tender age of 30 after a season that saw his father's brutal murder -- and left him with doubts about whether he should continue playing professional basketball. This fascinating program explores the two-year period that ultimately found him waging a triumphant comeback in 1995 and a return to the NBA.