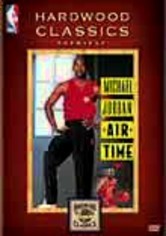 2006 NR 0h 51m DVD
For Michael Jordan, the 1991-92 season was an especially hectic year, filled with gambling allegations, his friend Magic Johnson's retirement announcement and a video shoot with self-proclaimed king of pop Michael Jackson. This thrilling program chronicles Jordan's every move during that dramatic time, including his play on the Olympic "Dream Team" with fellow NBA stars and his place of honor at the Chicago Bulls' championship ring ceremony.