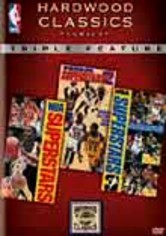 2006 NR 2h 12m DVD
Larry Bird, Magic Johnson and an arsenal of the NBA's biggest superstars show off for the camera in this unique triple-feature program that rounds up footage previously released as part of the Superstars series of videos. Unbelievable hardwood highlights flow alongside music from some of MCA's most popular recording artists, creating a virtual music video that captures the spirit of the game like nothing else.