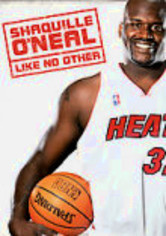 2006 NR 1h 45m DVD
To say that NBA all-star Shaquille O'Neal is unlike any other player in professional basketball is a serious understatement -- because the truth is, he's in a league of his own. Packed with thrilling game footage, this retrospective program traces Shaq's dominating presence on the hardwoods with the Los Angeles Lakers and the Miami Heat, highlighting his impressive skills on the court and his infectious sense of humor on the sidelines.