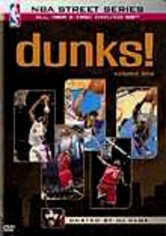 2003 NR 1h 18m DVD
Just a few short decades ago, dunking was an art form (some would say a form of "showboating") practiced by only a few gifted -- or tall -- players. Nowadays, it's a league institution, complete with its own yearly competition. This film captures the NBA's highest-flying superstars, including Vince Carter, Kobe Bryant and LeBron James as they blast off to nether regions we mere mortals can only dream about. Hosted by MTV's DJ Clue.