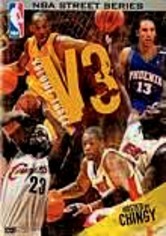 2005 NR 1h 0m DVD
In the third volume of this popular series, you'll head into the hardwood action surrounded by some of the National Basketball Association's biggest names. Watch as superstars Shaquille O'Neal, Kobe Bryant and LeBron James -- among others -- put on a jaw-dropping display of blocks, pinpoint passing and impressive slam dunks. Also showcased are the NBA's 2005 most valuable player Steve Nash and two-time NBA champ Manu Ginobili.