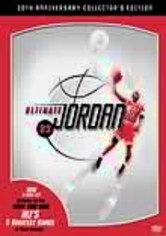 2004 NR 6 discs
Air Jordan shows off his amazing moves in this tribute to one of the greatest basketball players of all time. The collection chronicles the NBA player's career, outlining a true sports legend as he develops his game and shoots way beyond expectations. Also included are five of Jordan's greatest NBA games in their entirety, the five best-selling Jordan programs, and over an hour of footage of the player's phenomenal plays, dunks and shots.