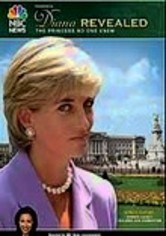 2006 NR 1h 6m DVD
Learn the facts behind the fairy tale in this feature-length documentary that originally aired as a news special on NBC -- an in-depth interview with "the People's Princess," Diana, Princess of Wales. Bonus material includes the short feature "Diana's Legacy," which chronicles the outpouring of affection shortly after her tragic death and the subsequent creation of the Princess of Wales Memorial Fund.