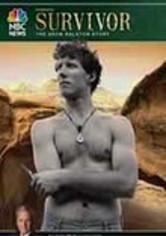 2006 NR 1h 22m DVD
When hiker Aron Ralston found himself trapped in a Utah canyon with an 800-pound boulder crushing his arm, he was forced to make an agonizing choice: to cut his arm free with a dull pocketknife ... or die. In this feature-length documentary that originally aired as a news special on NBC, anchor Tom Brokaw accompanies Ralston on an emotional journey back to the scene of his harrowing ordeal, retracing the events that changed his life.