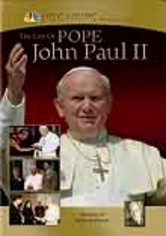 2005 NR 1h 17m DVD
The life of Pope John Paul II is explored in this documentary from NBC News. From his days growing up in Poland to his eventual rise through the Catholic Church to its most celebrated position, get an inside look at the fascinating life of one of the world's most prominent figures. Also includes bonus segments: "The Pilgrim Pope," "The Sistine Chapel Restored," "The Making of a Saint," "The Insider" and "The Today Show at the Vatican."