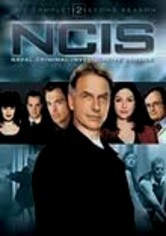 2004 NR 6 discs
The stakes are even higher in the second season of this hit drama series that follows a talented team of investigators from the Naval Criminal Investigative Service led by Special Agent Leroy Jethro Gibbs (Mark Harmon). A group of terrorists targets an Iraq War veteran; a woman's remains are found mummified and still garbed in the wedding dress she was wearing when she died; and a marine helicopter turns up in the middle of a crop circle.