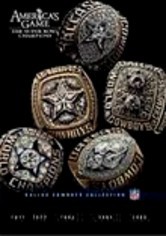 2007 NR 5 discs
One of the most storied franchises in all of team sports, the Dallas Cowboys have captured the imaginations of sports fans for decades, and this extensive look at their fabled history perfectly illustrates why they're regarded as "America's Team." From their first Super Bowl victory in 1972 to the early '90s when they won three out of four championships, the Cowboys have achieved a level of dominance rarely seen in the NFL.