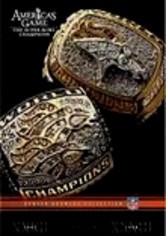 2007 NR 2 discs
Relive the action of the Denver Broncos' powerhouse 1997 and 1998 seasons with this compilation from NFL Films. In one of the greatest ironies in pro football, the Broncos were one of the winningest teams in the NFL during the 1970s and '80s but lost their first four Super Bowls. It finally all came together in 1997, when John Elway and Terrell Davis led the team to Super Bowl success, a feat they repeated a year later.