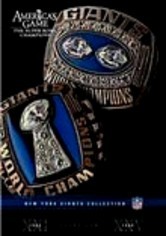 2007 NR 2 discs
After three decades without a trip to the Super Bowl, the New York Giants were due. Enter coach Bill Parcells and future Hall of Fame players Lawrence Taylor and Harry Carson, and the rest is history. After capping 1986 with the championship, the team went on to repeat the feat four years later, with underdog Jeff Hostetler stepping in for an injured Phil Simms. Relive the thrill of both victories with this collection of footage from NFL Films.