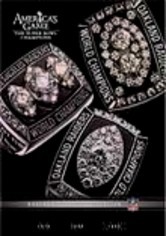 2007 NR 3 discs
This installment of the NFL's "America's Game" series puts the Oakland Raiders firmly in the spotlight with a focus on the team's trio of Super Bowl wins in 1976, 1980 and 1983. Highlights include vintage footage capturing action from former Heisman Trophy winner Jim Plunkett and Hall of Famers Gene Upshaw, Marcus Allen and Howie Long, as well as commentary from former head coach and Hall of Famer John Madden.