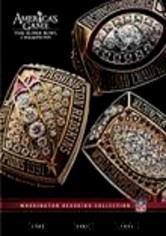 2007 NR 3 discs
This installment of the NFL's "America's Game" series retraces the steps of the 1982, 1987 and 1991 Washington Redskins teams as they plow their way to three Super Bowl titles in 11 years under the direction of head coach Joe Gibbs. Highlights include exclusive game footage, analysis of memorable plays and commentary from the coaches and players who made the magic happen, including quarterbacks Joe Theismann and Mark Rypien.