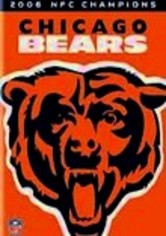 2007 NR 2h 49m DVD
2006 was the Bears' best season in 21 years, as they ended the regular season just one win short of the Super Bowl. Relive every moment of the powerhouse season in which head coach Lovie Smith delivered on his plan to return the team to glory. Rex Grossman led the hard-hitting offense with 23 touchdown passes, while Devin Hester earned an NFL record for most touchdown returns in a single season in his first year with the franchise.