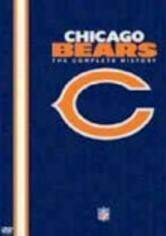 2005 NR 2 discs
Dubbed the Monsters of the Midway, the Chicago Bears own a rich gridiron history, which began with the franchise's inception in 1920. Throughout the years, their roster has boasted legendary coaches and superstar players such as Gale Sayers, Dick Butkus and Walter Payton. This extensive package tackles the team's greatest moments -- including their 46-10 rout of the New England Patriots in Super Bowl XX, led by maverick quarterback Jim McMahon.