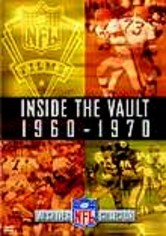 2003 NR 3 discs
Football fans of all stripes will delight in this exhaustive collection of game footage and behind-the-scenes clips featuring athletes, trainers and commentators from the NFL's early days. The in-depth anthology begins with the creation of the National Football League Championship in 1962, explores the merging of the NFL and the American Football League, and concludes with Super Bowl III.