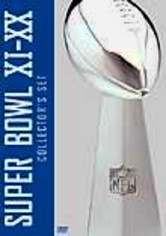 2004 NR 5 discs
Catch the best gridiron action on the field as the titans of football face off in this series that boasts 10 years' worth of Super Bowl battles, beginning in 1967. This NFL Films production features narration by expert John Facenda and includes the 1969 Minnesota Vikings-Los Angeles Rams playoff, the 1971 Miami Dolphins-Kansas City Chiefs overtimer and the 1975 Dallas-Minnesota challenge.