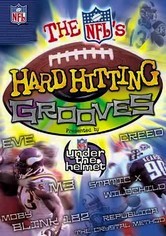 2001 NR 0h 40m DVD
Find out what music motivates some of the NFL's hardest hitters. In this NFL Films-produced documentary, football stars like Peyton Manning and Jack Plummer talk about how certain music gets them in the zone. Find out which athletes harbor a secret dream of rock stardom and which rock stars really want to play ball. The video also includes interviews with musicians and performances by Creed, Eve and Moby.