NFL: History of the Colts 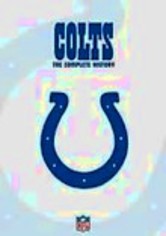 NFL: History of the Colts

2006 NR 2 discs
Track the Colts from their Baltimore days, including the 1958 and 1959 Championships and the last-minute victory of Super Bowl V, to their arrival in Indianapolis and the Peyton Manning years. Relive the "Greatest Game Ever Played," the "Midnight Miracle" and the astounding would-be comeback in the 1995 AFC Championship. Colts stars Johnny Unitas, Marvin Harrison and head coach Tony Dungy share their experiences.