NFL: History of the Denver Broncos 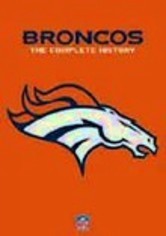 NFL: History of the Denver Broncos

2006 NR 2 discs
Relish the rise of the Denver Broncos, a team that experienced little success in their early years to become one of the elite franchises of the league, advancing to the Super Bowl six times. Witness the Broncos' redemption for four lopsided Super Bowl defeats with back-to-back Super Bowl championships in 1998 and 1999, led by Hall of Fame quarterback John Elway, running back Terrell Davis and coach Mike Shanahan.