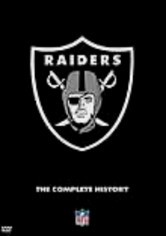 2004 NR 2 discs
Gridiron fans won't be disappointed with this two-disc series that examines the roots of one of the league's most colorful teams, the Oakland Raiders, and its rise through the ranks from fledgling franchise to championship contenders. With the help of interviews, footage, game clips (including plenty from the 2004 season) and more, you'll learn how the Raiders team was put together and what their journey has been through the decades.