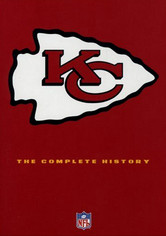 2007 NR 3h 0m DVD
Witness the history of the Kansas City Chiefs, one of the NFL's most resilient and successful teams, from its founding in Dallas in 1960 by AFL creator Lamar Hunt through its modern-day success. Meet personalities such as head coaches Hank Stram and Herman Edwards, who ensured the team's place in pro football history, and relive the excitement of the Chiefs' appearance at the first Super Bowl, their victory at the 1970 championship and more.