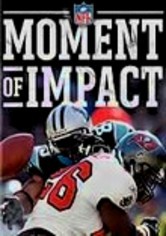 2007 NR 1h 18m DVD
Designed to expose the rougher side of an all-American pastime, this program will have you huddling with some of the toughest players in the NFL. Sounds from actual games -- including exclusive "player wires" -- combine with hard-hitting footage and the chance to run side by side with greats such as Patrick Kerney of the Seattle Seahawks, Ray Lewis of the Baltimore Ravens, John Lynch of the Denver Broncos and Michael Strahan of the New York Giants.