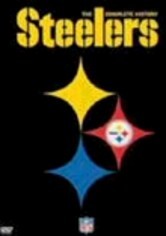 2005 NR 2 discs
Beginning with the franchise's founding in 1933, the Pittsburgh Steelers have built a proud and storied gridiron history. The team became a dynasty in the 1970s, led by legendary coach Chuck Noll, star quarterback Terry Bradshaw, running back Franco Harris and the famed "Steel Curtain" defense. This comprehensive package covers the squad's greatest moments -- including their thrilling 35-31 victory over the Dallas Cowboys in Super Bowl XIII.