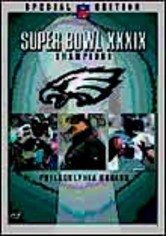 2005 NR 3h 0m DVD
Relive the epic showdown between two great NFL teams -- the NFC Philadelphia Eagles and the AFC New England Patriots -- as they battle each other for bragging rights to the most coveted trophy in football. The 39th Super Bowl was a battle of great defenses from the start to the breathless finish, with the Patriots securing dynasty status by eking out a three-point victory. Watch all the highlights, including conference championship games.