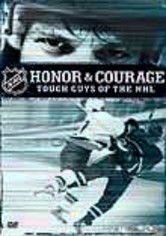 2005 NR 2h 25m DVD
Perhaps in professional hockey more than in any other sport -- except Olympic boxing -- the act of a man wielding his fists on behalf of his teammates is sanctioned and even encouraged. Intimidation frequently determines a team's success, and bench-clearing brawls are always a favorite with fans. This video looks at the role and goal of National Hockey League "enforcers" and their immeasurable value to their teams.