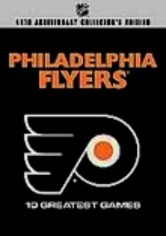 2006 NR 10 discs
Enjoy the original broadcasts of 10 of the Philadelphia Flyers' greatest games in this thrilling collection voted on by the team's fans. Included are the 1974 Stanley Cup clincher over the Boston Bruins, the 1975 Stanley Cup win over the Buffalo Sabres, the landmark 1976 game against a Soviet team, the 1979 record-breaking victory that extended the Flyers' undefeated streak to 29 games, the magical 2004 playoff run and more.