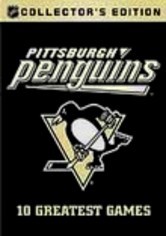 2007 NR 10 discs
One of the most storied franchises in the history of the NHL, the Penguins have been a part of countless historic moments. Selected by the fans, this collection of Pittsburgh's greatest games is one any hockey lover can appreciate. Featuring highlights of Penguin greats Mario Lemieux, Jaromir Jagr and Sidney Crosby, the set also relives the title games from both 1991 and 1992, which ultimately saw Pittsburgh raise the Stanley Cup.