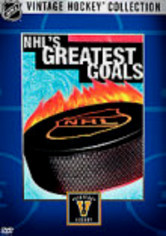 1995 NR 0h 46m DVD
Relive some of the greatest goals in National Hockey League history with host Denis Leary in this thrilling retrospective program that gathers all the best cup-winning shots, overtime winners, spin-o-rams, and more into one exciting compilation. Memorable scores include Wayne Gretzky's record-breaking 802nd goal and Mario Lemiuex's unbelievable goal that he shot between his legs against the Vancouver Canucks.