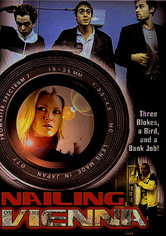 2002 NR 1h 34m DVD
Vienna isn't a physical destination but rather a state of bliss for Peter (James Murray), Mickey (Daniel O'Meara) and Jez (Merryn Owen), three robbers who decide there's better money to be made in making a movie about a bank heist than in staging an authentic one. For the role of the villain, the trio casts a bona fide criminal and comes to regret it when he whips out a gun and threatens to shoot if they don't stick up the place -- for real.