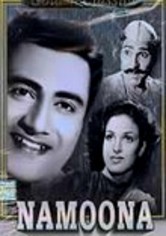 1949 NR 1h 50m DVD
At the heart of this classic Indian film is a pair of love triangles, both involving the kindhearted heir Kedarnath. When the wealthy young man falls for a beautiful charity worker, he must swallow his affection when he finds out she's in love with another -- a refugee named Jeevan. Kedarnath next turns his attentions on Shyama, but she, too, has a suitor of sorts -- a lecher named Lacchu.