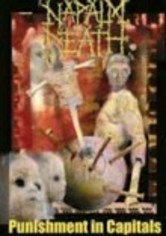 2002 UR 2h 40m DVD
Catch seminal grindcore band Napalm Death in concert as they perform more than two dozen killer tracks, including such favorites as "Mass Appeal Madness," "Volume of Neglect," "From Enslavement to Obliteration" and "Cure for the Common Complaint." In addition to the U.K. group's amazing live set from London, a documentary, exclusive interviews and bonus concert footage from Tokyo and Chile are included.