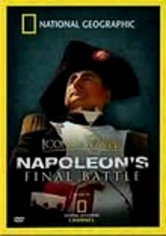 2006 NR 1h 28m DVD
This historical documentary from National Geographic recounts the final defeat of one of history's most compelling leaders. Napoleon Bonaparte's phenomenal rise to power came to an end by 1814, when an alliance of enemies triumphed over his forces and banished him to the island of Elba. But the French ruler refused to give up on his dream of world conquest, and he proceeded to organize an epic, history-defining battle from his island prison.