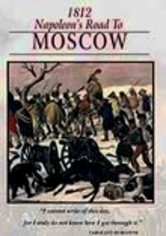 1999 NR 0h 55m DVD
Robert Powell narrates this film documenting the march of Napoleon and his more than 650,000-man army into the vast Russian interior, including the battle of Bordino and the soldiers' retreat from Moscow. Using computer-generated maps, footage from films such as War and Peace, battle reenactments and expert commentary, the film explains Napoleon's military genius in the context of his greatest battles.