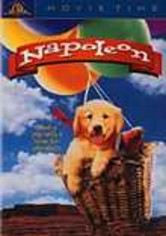 1994 G 1h 21m DVD
Cute, furry Muffin (voiced by Jamie Croft), a golden retriever who would rather be called Napoleon, is the hero of this live-action family adventure, which fits the mold of Babe and Incredible Journey. When an accidental balloon ride takes Muffin from the Australian outback to Sydney Harbor, the retriever encounters a menagerie of indigenous animals along the way. Stars Joan Rivers and Dame Edna (among others) lend their voices to the animals.

Parents need to know that Napoleon is a 1995 movie about a spunky young golden retriever who thinks he can live in the wild. There are some scary scenes involving a feral black cat who hisses and threatens to kill Napoleon; these scenes are accompanied by "horror movie"-style background music. There's also a scene where Napoleon falls from the sky in a basket and crashes into rocks, turning end over end, among other scenes where Napoleon faces peril. There's some name-calling and mild profanity ("dork," "sucks.") For parents, some of the shriller animal voices might prove annoying over repeated viewings, but there are some humorous references for older audiences -- for instance, Napoleon meets two wild puppies named Sid and Nancy.

Throughout the film, a scary black cat is shown hissing and threatening Napoleon and the other animals, with these scenes typically accompanied by "horror movie" background music. An owl is shown attacking this cat when the cat is on the verge of attacking Napoleon. As Napoleon floats in a basket carried by helium balloons, a bird pops the balloons and sends Napoleon to a crash landing on rocks; the basket is shown turning over with Napoleon inside.

The film discusses the importance of home, family, and friendship.