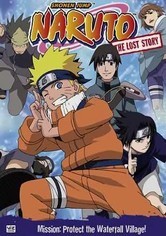 2007 NR 0h 40m DVD
While on a mission to protect the Village Hidden in the Waterfall, Naruto and the other members of Team 7 find themselves under attack by a vengeful Hidden Waterfall jonin and his cronies, who want to rob the village of its valuable Hero's Water. To match wits with their assailants and save the day, Naruto and the gang will have to persuade the village's fearful leader to abandon his cowardice and act bravely in the face of danger.