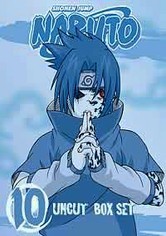 2002 NR 3 discs
When the rescue mission helmed by newly appointed chunin Shikamaru fails to retrieve Sasuke, the Hidden Leaf ninjas receive some much needed help from a team of Sand Village warriors led by Rock Lee and Gaara. While the rescue squad takes on Orochimaru's henchmen, former friends Naruto and Sasuke cross paths near the waterfall of Final Valley and square off in an epic battle destined to shape the future of the two young genin.