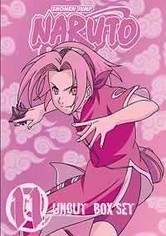 2002 NR 3 discs
Following his epic battle with teammate-turned-rival Sasuke, Naruto joins Team 7 member Sakura and his mentor, Jiraiya, on a reconnaissance mission to locate the lair of arch-nemesis Orochimaru. Later, when Naruto learns that Mizuki, the former teacher convicted of betraying the Hidden Leaf village, has escaped from prison, he joins his sensei, Kakashi, on a mission to bring the shameless traitor to justice.