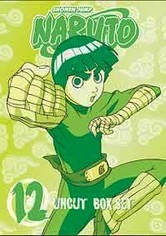 2002 NR 3 discs
While waiting for his mentor, Jiraiya, to return to the Village Leaf so he can resumes his training, Naruto joins Rock Lee, Tenten and Neji on a mission to defend a nearby gold mining village from a band of menacing thugs. Also in this season, Hinata reveals that she's carrying a flame for Naruto, Rock Lee squares off with the lightning bolt-wielding warrior Raiga and Naruto's gas spoils the team's efforts to capture the rare Bikoshu Beetle.